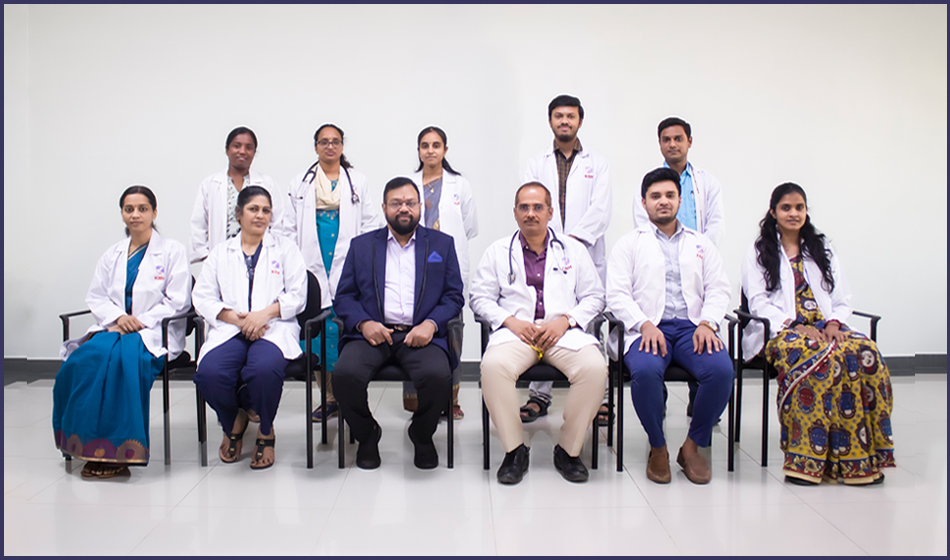 When COVID 19 strikes hard, it's not easy to come back un-maimed. 27 year old Sravankumar was admitted to Dr. Kamakshi Memorial Hospital in June 2021 with severe COVID 19 infection and co-existing prediabetes. He had initially been treated at his hometown, but given the severity of the infection he was brought to Dr. KMH. His symptoms indicated a black fungus infection as well, which was confirmed with a biopsy. It was a case of Highly Invasive Mucormycosis that had to be treated with urgency as it was life-threatening.

A multidisciplinary team of expert doctors comprising of Infectious Disease Specialist, Nephrologist, Ophthalmologist, Oro-Faciomaxillary Surgeon, Endocrinologist, ENT Specialist alongwith the Physiotherapy and Intensive Care team under the able guidance of Medical Superintendent was immediately put together to gauge the situation and work out the best possible way to proceed. Contrast enhanced CT (CECT) and MRI FACIAL Bone with brain showed the spread of Mucormycosis into complete left half of his face involving 3/4th upper jaw, left orbital/ eyeball muscles with orbital apex, left Brain cavernous sinus and left Masticatory facial muscle spaces. Due to the highly invasive pattern and vascular spread of the fungal infection it was evident that the surgery would leave the patient with considerable facial disfigurement - but it was the only way to save his life. Sravankumar was made to understand the situation by specialized counselors before he was taken into surgery. Most of his upper jaw and all of his left facial bones along with the floor of his eyeball were removed.

However, four weeks after the procedure CECT and MRI showed that the infection had spread to the rest of the left side of his face including the eye. The doctors recommended an immediate surgery but this meant Sravankumar would lose the entire left side of his face. With no other option, upon the consent of Sravankumar, the second salvage surgery was performed. During the second procedure the rest of his upper jaw and left orbital exenteration (eyeball removal) was done.

Post procedure the patient was kept under observation with IV antifungals for another 4 to 6 weeks under the close monitoring of the MDT. Repeat CECT & MRI suggested an arrest in the spread of infection by the month of August. Sravankumar eventually recovered completely from the black fungus infection but had sustained major morbidity - he had lost one entire side of his face. He could barely talk and had extreme difficulty in eating as well. It was definitely heart-breaking to see Sravankumar suffer this way in the prime of his life. With one side of his face practically flattened, the emotional trauma was perceptible. He had survived a severe COVID infection and a fatal Black Fungus infection, but the journey forward looked bleak for this other-wise active young man. At this point Facio Maxillary, Head and Neck surgeon Dr. Selvakumar C proposed performing advanced facial reconstruction surgery.

Reconstructing Maxillofacial defects, both congenital and acquired, is quite challenging for most surgeons due to the region's complex anatomy and the cosmetic and functional effects it has on patients. From a functional and aesthetic view, it is imperative for surgeons to accurately restore the defect in a way that will ensure patient satisfaction and well being. Previously, the use of premade alloplastic implants and autogenous graft was often associated with infection, resorption and displacement. Recent technological advancements have led to the use of custom made 3D computer designed patient-specific implants(PSIs) in reconstructive surgery. With PSI, even the total temporomandibular joint replacement (Jaw joint) and post cancer surgical defect of Face and Jaws is possible.

In October 2021, once the patient's condition had stabilized after the two surgeries he was prepped for Facial Reconstructive surgery. The first step was to take a 3D CT-Facial Bone scan to assess facial defects and to also design customized implants. The PSI for both left and right face was fabricated along with Implant supported Maxillary prosthesis (upper jaw). Total Facial Reconstruction surgery was carried out by Dr. Selvakumar. There were no complications and the depressed uneven face was corrected cosmetically keeping as close to the original morphology of the patient as possible. The next most important part was to reconstruct the upper jaw to enable the patient to eat and speak. This complex procedure was taken up in December 2021. The maxillary prosthesis was fabricated and fixed with the facial prosthesis with the implant support. Eventually the patient was able to speak better and eat normally. After months of struggle, Sravankumar had finally recovered.

Several cases of mucormycosis in people with COVID-19 have been increasingly reported world-wide, especially in India. The primary cause for Mucorales spores to germinate in people with COVID-19 is the ideal environment of low oxygen (hypoxia), high glucose (diabetes, new onset hyperglycemia, steroid induced hyperglycemia), acidic medium (metabolic acidosis, diabetic ketoacidosis), high iron levels and decreased phagocytic activity of white blood cells due to immune-suppression coupled with other shared risk factors including prolonged hospitalization with or without mechanical ventilators. Thus a carefully planned, step by step, multidisciplinary team approach with judicious use of medications will help patients affected with COVID 19 recover even from fatal infections such as Mucormycosis.

Thanks to the dedication and immense effort of the doctors at Dr. Kamakshi Memorial Hospital, today Sravankumar is living a healthy and normal life. The patient-first attitude is what drives every member of Dr. KMH - inspired and inculcated in each and every one by the chairman, Dr. TG Govindarajan.